We almost lose it. Burnout. Too many colliding interests and aspirations precipitate a crash – which shakes us up and sorts our minds. 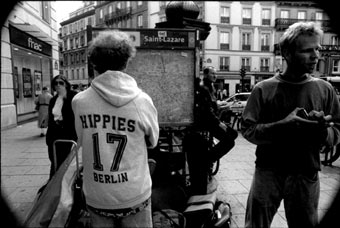 Our second CD »Wer ist das?« (Who is that?) comes out in Germany.

The record release party is too big a success … too many people turn up, and we have to leave the place. Traffic on Berlin's Kastanienallee breaks down … we give everything! Our audience makes one hell of an impression on us… 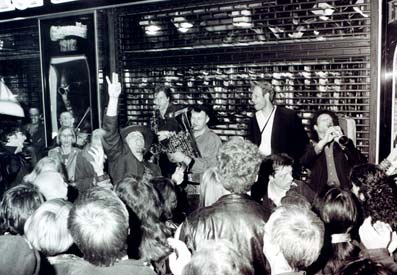 We play the South by Southwest Festival in Austin/Texas!

The story about Alice in [hip-audio mp3="http://en.17hippies.de/wp-content/uploads/sites/2/2017/05/12-hotelcazane-if.mp3"] HOTEL CAZANE is a souvenir from our trip… the dissipated hotel lobby and the Zydeco club ‘Richard’s’ where we just danced and danced into the small hours.

Some years later we gave this Zydeco souvenir a new lease of life: [hip-audio mp3="http://en.17hippies.de/wp-content/uploads/sites/2/2017/05/14-hoyaka-if.mp3"] HOYAKA transforms the traditional ‘Bernadette’ into a piece with lyrics sung in regional Hesse dialect about an equally earthy nugget of wisdom. 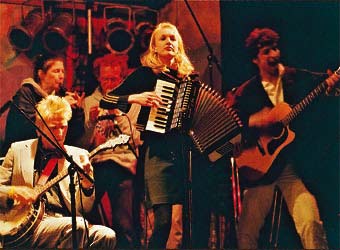 Playing 18 concerts from daybreak to late at night we beat Berlin into submission by beating the ‘world record for the most concerts in 24 hours’: Tempelhof airport, the TU university refectory in Charlottenburg, the Amerika Gedenkbibliothek and the Markthalle in Kreuzberg 61 district; Café Einstein, Chamäleon and Tresor in Berlin-Mitte; Madonna and Rote Harfe in Kreuzberg 36, then Ex ’n Pop in Schöneberg, plus eight other venues scattered around the city. 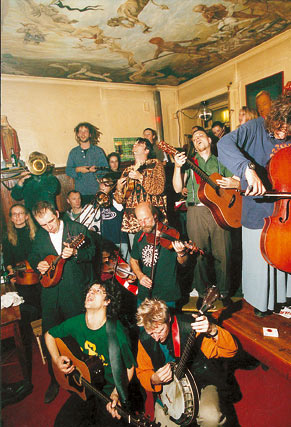 We record (lets say compile) our first CD at Berlin's legendary BEAT STUDIO. Legendary, as probably every Berlin Band that has spoken up in town, gets to record here.

To get people to notice our CD we get our own distribution going. Kiki and Dirk walk our recordings from shop to shop … what a surprise, with the end of the year we have to go and manufacture a second edition!

We look for tunes none of us know and discover that pieces with cryptic titles like [hip-audio mp3="http://en.17hippies.de/wp-content/uploads/sites/2/2017/05/03-bourreedite-13.mp3"] BOURRÉE DITE D’AURORE SAND (simple tune, easy chords and a straightforward 4/4 rhythm) can be turned into dynamite dancefloor hits. 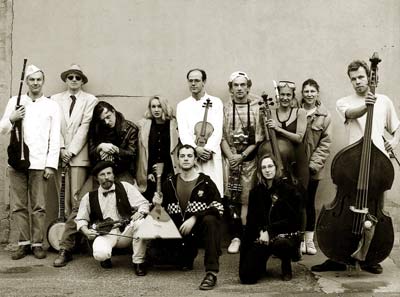 Our tiny rehearsal room under Tempelhof airbase is on the verge of bursting; we move to the MS "Pik AS" for more room, friends ... and air! 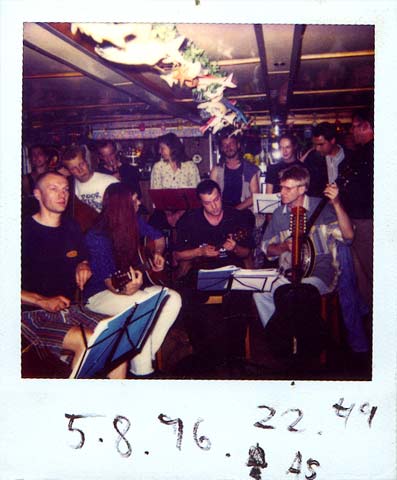 No one really knows why exactly seventeen or why even hippies. But having a name is good, like a road sign announcing a town – it tells you where you are. No one has any idea what’s coming up after the town sign, nor has anyone worked out what we’re supposed to be doing or even where the 17 HIPPIES are heading. One of the first songs we ever played is called [hip-audio mp3="http://en.17hippies.de/wp-content/uploads/sites/2/2017/05/04-valseacadet-13.mp3"] VALSE À CADET. 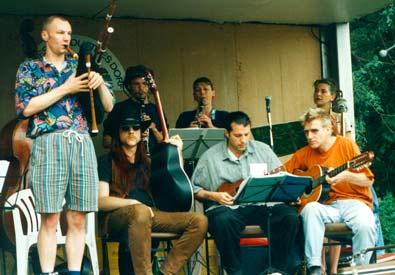 We get together once a week and everyone involved is meant – if possible – to play some instrument other than the one he normally does. This is how we ended up with ukulele, banjo, bagpipes and accordion – and not, say, bass guitar, guitar, drums and piano. We notice how immediate and vigorous the acoustic sound is.

The idea is to be able to perform anywhere without amplification. 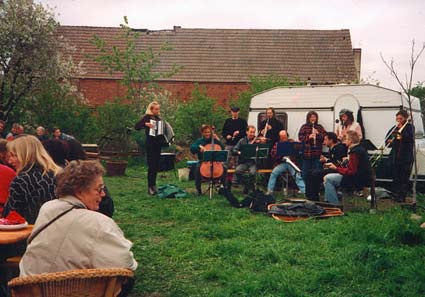