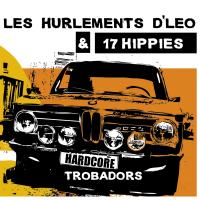 6 brilliant songs, composed and played by the French band HURLEMENTS D’LÉO and the 17 Hippies.

20 musicians spent three weeks cooped up in a studio in Berlin and went on to present the joint repertoire on a tour in France over several weeks.

The 12″ single (in Germany only available at the 17 Hippies shop) is an impulsive mixture of the traditions of both groups: urban, Eastern European and chansonésque.