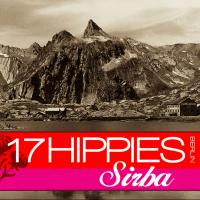 SIRBA is the 2nd CD by the 17 Hippies to be published in France. It is a “Best of” of the German live CD “Wer ist das”?” and the “Halbe Treppe” soundtrack (in France the film was called GRILL POINT).

In addition, there is the song «Vallée de Sirba» sung by Laulo, one of the HURLEMENTS D’LEO singers, and our own first French song, “Marléne”.