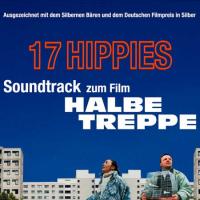 The soundtrack to the film of the same name by Andreas Dresen was created much like the film itself and above all – very unusually – along with the film.

Halbe Treppe had no fixed written script. The actors and film team lived in Frankfurt/ Oder for three months, filming several scenes and in the evenings looking at what they had come up with and thinking about how the story might be continued the following day.

We joined them in Frankfurt/Oder from time to time, each time bringing new songs, which Andreas used directly for the filmed scenes. Thus the music suddenly helped decide which direction the story was to take: melancholic, happy, hopeless or uplifting…